The Endor's Bunker
A scenario by Alban NANTY
for the 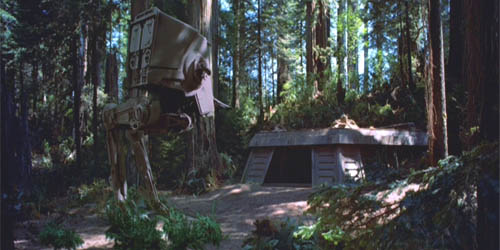 The Rebel Alliance has discovered the secret place where the second Death Star is building. The Death Star, not fully functional, is protected by an energy field generated on the Endor moon. The Rebels planed to enter in the bunker where this field is generetad and make explode the whole installation in order to allow the fighters to approach and destroy the Death Star. On the way they found some Ewoks ready to help them...

This scenario tends to recreate the battle on Endor of the "Starwars: Episode VI, The return of the Jedi" movie. It is designed for two players, one will play the Rebel Alliance and the Ewoks, while the other one will play the Empire army.

To win the game, the Rebels must enter in the bunker and put 3 bombs in it.

To win the game, the Imperials must eliminate all the Rebels and Ewoks.

The battle will take place on 6 baseplates 32x32, i.e. the size of the battle field is 96x64 studs. Most of the battlefield is covered by big trees whose trunks are represented by 4x4 round bricks. On one side there is the bunker. Below you will find the building instruction for this bunker, but of course you can build your own. This bunker should have two sliding doors with control panels inside and outside, and 3 places to put the bombs.

At the beginning of the game, the internal door is closed and the external door is open (but probably the Imperial player will close it quickly during the first Round :-)). The Rebel player starts first (because this battle is supposed to be a surprised attack from the Rebels)!

The imperial player must place in the bunker the 3 imperial technicians (usally sit at their place) and at least 1 officer and 2 stormtroopers (he can place some other minifigs inside if he wants). The other imperial units are placed as he wants on the baseplates A1 and A3 (he can not place units in front of the bunker door on A2). The rebel player must place all its minifigs on baseplates B1, B2 and B3. He can put some minifigs in the trees for free at the begining. The 3 white crosses in the Bunker indicate the places where the 3 bombs must be fused by the Rebel player. The places of the trees are given here as an example, of course you are not obliged to respect them exactly. A average of 20 trees gives a good balance between cover for minifigs and free space for AT-ST movements.

Optional Rule: If you don't have enough Ewoks or enough Stormtroopers, you can place the number of minifigs you have on the battle field at the beginning of the game, then each time a trooper is killed, respawn this minifig on the boundary of the battle field (on the top border of A1/A3 for the imperial player and on the bottom border of B1/B2/B3 for the Rebel player). Respawn as minifig as necessary to reach the correct number describe in the army list below.

Each rebel trooper carry a bomb in its backpack. When a trooper is killed, leave its backpack on the battle field. Another minifig can pick up the backpack (using the normal rules) if it doesn't already have one. When a bomb is fused, put the backpack at the corresponding position and remove it from the game when the bomb exploded. A minifig that carry a backpack can also give it to another minifig using the normal rules. See the special rules about the bombs below for more details.

"Bring those two down here!". The General can perform a special action. By spending one action in his Action Budget he can point at a minifig he can see (no matter the distance, only the visibility count). Mark this pointed minifig with a black MB. All the imperial units not already played during this Round can benefit a bonus of +1 brick on all their Attack Action toward the marked minifig. At the end of the Round, remove all the black MB added by the general. Since the General has 3 actions in his Action Budget, he can point at 3 different units during his Turn, but pointing at the same target 3 times will not give a +3 bonus for Attack Action (the bonus is maximum +1). 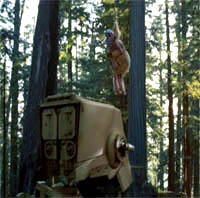 Ewoks, Chewbacca or Han Solo can spend one action of its Action Budget to climb on a tree (the other minifigs can't climb in the trees). The minifig must be closed to the tree to jump on it, that means at 2 or less studs from the tree. When a minifig jump on a tree, put the minifig on the 4x4 round brick that represent the trunc of the tree. A minifig in a tree is always considered as covered by this tree (reminder: +1 brick for its Dodge/Armor BR). As for a general rule in BOW, you can not put more minifigs in a tree than the tree trunc can decently carry. A minifig in a tree can perform a distant or close combat attack using the normal rules. 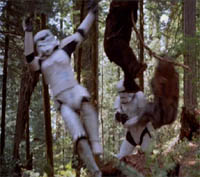 Once on a tree, a minifig must spend one action of its Action Budget to jump from the tree. The minifig can jump to a distance equal to its Move ability (it costs one action). It can also use more Move Actions (but of course no more than its Action Budget) to jump farer. In that case we consider that the minifig used a creeper to reach a far point. For example if an Ewok used his 2 actions, he can jump to a distance of 8 studs from the tree (because its Move Ability is 4). Another example: an Ewok encouraged 2 times by C3PO can use its 4 actions to jump to a distance of 4 x 4 = 16 studs.

A minifig who jump from a tree can land on the top of an AT-ST if the distance is not too short. A minifig that jump from a tree and land on another minifig can inflict damage. The jumping minifig does a BR with as many brick as its Move Ability no matter the distance (so 4 for an Ewok and 6 for Chewbacca and Han Solo), and of course the target minifig does a resisting BR with its Dodge/Armor Ability.

At the beginning of the game the internal door is closed and the external door is open. The bunker doors are indestructible, they will not receive any damage even if you fire with the AT-AT. To open a door from outside, a minifig must be near the outside control panel and does a Repair action (R2D2, Han Solo and Chewbacca have good Repair Ability and should perform this action). The imperial player does the resisting BR for the door with also the Repair Ability of the minifig who is currently controlling the inside control panel. Normally it should be one of the Imperial technician. But of course if none minifig is sit in front of the inside control panel, the Imperial player can not launch bricks to resist to the opening.

Moreover, during his Turn and if his Action Budget allow it, the Rebel minifig in front of the outside panel can try to perform a "Hacking" action if the doors are already opened. Again to resolve this action, use the Repair Ability of the minifigs in front of the outside and inside panel. If the Rebel minifig succeed this action, you can stack a yellow MB on the door, representing a "Hacking" point. To close the doors, the Imperial player must first remove all the "Hacking" points stacked on the doors, in the same way.

Example: During its Turn, R2D2 used two actions to Move close to the outside control panel, and use its last action to open the external door (Rebel: 6 Bricks to Roll, Imperial: 2 Bricks to Roll). This action succeed so the external door is now open. During the same Round, the Imperial player plays his 3 Imperial technicians one after the other. All these minifig make 2 actions to try to close the external door (that makes 6 attemps in this Round). Since R2D2 is still close to the outside panel each BR is made of 2 Bricks for the Imperial and 6 Bricks for the Rebel. Fortunatly for the Rebel player, all these close door action failed. During the next Round R2D2 make another open action to open the internal door (still with the same number of bricks to rool: 6 against 2) and this action succeed. Then for the two remaing actions of its Turn, R2D2 try to "hack" the door. Again the Rebel player launch 6 Bricks and the Imperial player launch 2 bricks. One of these two "Hacking" action succeed, so the players put a yellow MB on the door. Now the Imperial player must first remove this yellow MB before trying to close the door again. 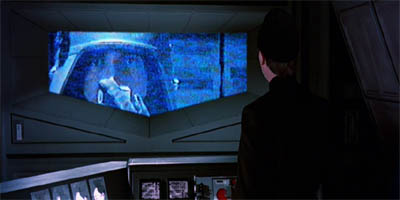 If Han Solo succeed to jump inside an AT-AT and to eliminate its occupants, he can try to convince the imperials inside the bunker to open the doors (only Han Solo can perform this action). In that case Han Solo must do a BR with 5 bricks and the imperial player does the resisting BR with 3 bricks. If the Han Solo's BR > imperial BR then the doors are open else nothing happen. WARNING this action can only be atempted one time. Of course if the action succeed and the doors are opened, the Imperial technicians can't close them while the Rebels stay outside the Bunker (since they truely beleive there's no threat anymore outside). They can close them during the next Round from the time one Rebel enters in the Bunker.

At the beginning of the game, the bombs are carried by the Rebel Troopers. Each Rebel trooper has one bomb in his backpack. When a trooper dies, leave his backpack at the same place on the battle field. A minifig that doesn't already carry a backpack can pick up the bag (it costs one action in the Action Budget, as explained in the core rules). Moreover a minifig can give its backpack to another one by using the normal rules.

An imperial minifig can also pickup a left backpack, and fuse the corresponding bomb (not in the bunker of course). Once a bomb is fused (by anyone, anywhere), it can not be defused. If there are less than three bombs left in the game, then the rebel player lost the game, consider that the imperials take all the living rebels prisoners.

Inside the bunker, there are three defined places where the three bombs must be put. Be sure that both players agree on these three places at the beginning of the game. The rebels minifigs will use the normal rules for puting the bombs in the bunker (no BR needed but cost an action in the Action Budget and of course the minifig must be near the place), but the bombs will not explode until the third and last bomb is fused. When the three bombs are placed, they will explode together at the end of the next Round.